Scumming Up the Waterways #IndianRiverLagoon 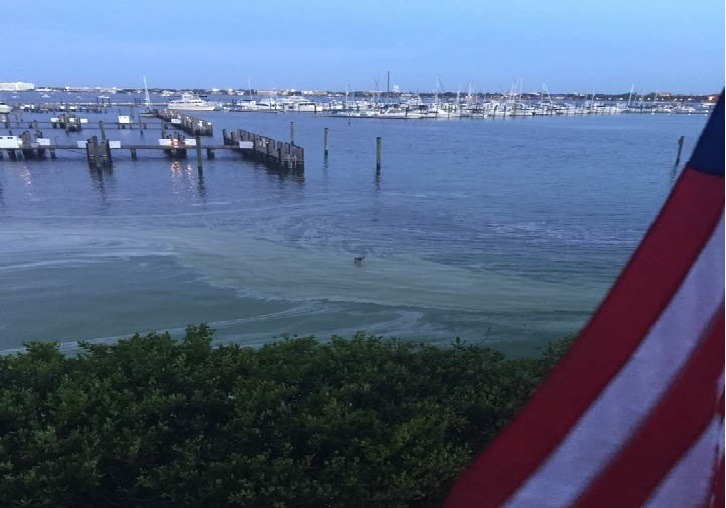 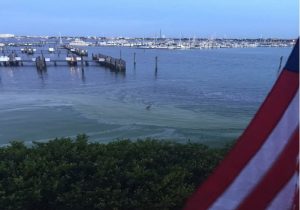 “Guacamole-thick” green algae is taking over southern Florida’s waterways and coastlines, prompting Governor Rick Scott to declare a state of emergency in four counties. Residents complain that the algae “smells definitely like a toilet” and the department of health is warning that contact with the toxic algae can harm the gastrointestinal tract, liver, nervous system, and skin. This comes as a huge hit to the many Florida communities that rely on beach tourism to make a living.

The green slime appeared when water was discharged from Lake Okeechobee, Florida’s largest freshwater lake, to prevent flooding. Unfortunately, the water was contaminated with excessive amounts of algae-causing nitrogen and phosphorus from a sources including fertilization runoff from farms and urbanization.

Governor Scott has blamed the issue on the federal government and water storage limitations. Others blame the state government for failing to properly regulate water pollution. With an issue this big, it is easy to point fingers at government agencies and expect a response. But what if there were a way for a market to prevent these problems in the first place?

Take Cheney Lake Watershed in Kansas. When algae was sprouting in the City of Wichita’s water source in the 1990s, the city contracted with upstream farmers to improve their farming techniques while reducing erosion and fertilization runoff. In 2010, Reed Watson and Brandon Scarborough explored how Wichita and the farmers of Cheney Lake Watershed turned to markets to improve water quality:

The environmental and economic costs of sedimentation and nutrient loading were far reaching. Declining water quality increased treatment costs to the City of Wichita. Furthermore, degraded water quality and habitat had compromised the ecological integrity of the watershed.

In the early 1990s, farmers Lyle Newby and Marion Krehbiel decided it was time to address the problem of sedimentation and declining water quality. As the primary beneficiary of any water quality improvements, the City of Wichita supported their efforts. In 1994, they formed the Citizen’s Management Committee (CMC), a farmer-led organization tasked with implementing the watershed plan. In 1999, the CMC established a non-profit organization called Cheney Lake Watershed, Inc. (CLW). This group provides education and assistance to landowners in the watershed interested in improving water quality.

As of 1994, the number of conservation practices and acres protected have increased annually. Between 1994 and 2006, 1,369 conservation projects were implemented – protecting nearly 80,000 acres of watershed.

Today, both the City of Wichita and the CLW claim that their arrangement has been mutually beneficial. Wichita has fewer algal blooms in their water, saving them water treatment costs, and the Department of Health and Environment reports lower phosphorus levels in the reservoir. The CLW also says their work in creating a culture of conservation amongst farmers has been successful by getting them to consider water quality in their operational decisions.

The finger-pointing we have seen in places like Flint and Florida are a recipe for disaster. Contracts and markets are key ingredients for the provision of clean water. Markets in water quality can prevent our recreational waters from becoming “pea soup.”

Source: TBT: Scumming Up the Waterways | PERC – The Property and Environment Research Center