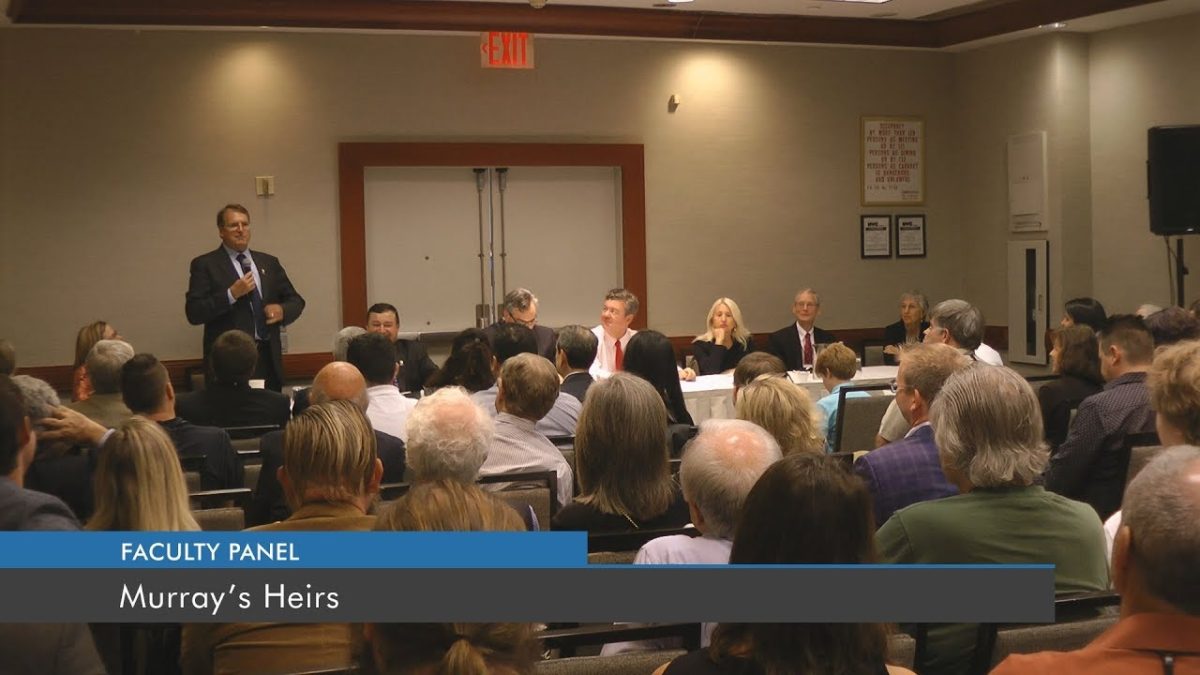 Below the video is a transcript of Jo Ann Cavallo’s intro.

Delivered at the 35th anniversary of the Mises Institute, October 2017.

I probably don’t merit inclusion in this illustrious panel of “Murray’s Heirs,” but I’m glad to share the story of how I first encountered Murray Rothbard’s work. It all started with watching the 2012 Republican primary debates on tv with my son and being blown away by Ron Paul. At the time, I was writing a book on the Italian Renaissance romance epic, and I kept getting distracted from my work to follow anything Ron Paul related on the internet. So when I saw a piece entitled “I hate Ron Paul” by a fellow named Walter Block, I immediately clicked on it ready to become enraged. But it started out: “Before the Paul campaign of 2012, I was a reasonably productive researcher and writer. Nowadays, that has all changed: I have become a Ron Paul junkie.” A kindred spirit! I suppressed the urge to contact Walter right then and there, but after reading another article by him on libertarianism and the environment, I gave in and sent him an email. He responded immediately with an invitation to join him and Paul Cantor on a “Literature and Liberty” panel at the upcoming Austrian Scholars Conference at the Mises Institute – and he wanted my answer asap. I asked my two kids if they thought I should go to the conference in Alabama and they replied, “No, we should all go!”

So there we were, heading off to Auburn for their high school spring break, a 15 hour car ride from our home in New Jersey. I wanted to find something to keep our minds occupied while traveling and thought we might as well get a jump start on Austrian economics. Joe Salerno had mentioned in an email reply to Walter that 2012 was the semi-centennial of the publication of Rothbard’s Man, Economy and State, so I bought the audio book before we left. The trip was a veritable Rothbard marathon, with time preference, value scales, the law of marginal utility, the emergence of money, all explained with brillance and clarity that even non-specialists like ourselves could follow.

Miles flew by as we were first stranded on a desert island with Robinson Crusoe picking berries, then exchanging with Jackson before moving on to a more complex economy at work. There was just one moment during the reading of a long chart with many, many horses and many, many barrels of fish that my daughter fell asleep (what they say about counting sheep must be true), but it was a short nap. For the rest of the time, my kids listened along with me, sometimes stopping the CD to comment. So I guess you could say that Rothbard accompanied us to our first Austrian Scholars Conference, where some of the distinguished speakers here this weekend were presenting papers that brought us right into the thick of things.

After a very intense and stimulating three days, it was time for the ride home and my kids wanted to take turns driving. To give them a break from Jeff Riggenbach reading Rothbard, I thought I’d read to them myself. I started a book I’d bought at the conference, Lew Rockwell’s The Left, The Right, and the State, and it was so compelling that I just kept reading until I was hoarse. Still, I couldn’t resist jumping ahead to the final chapter, entitled “We Need an Angel Like Clarence,” because of its reference to Frank Capra’s classic It’s a Wonderful Life. Near the opening of the chapter, Rockwell remarked, “Murray Rothbard used to wonder why people who believe that liberty is unachievable or that activism of any sort is futile became libertarian in the first place” (530). And then he went on to make the point that “No state is liberal by nature, said Mises. Every state wants to control all. If it does not do so, the major reason is that freedom-minded intellectuals are making the difference” (531). I decided then that I wanted be part of that group, in my own small way.

As it turned out, the book I was completing, The World beyond Europe in the Romance Epics of Boiardo and Ariosto, already had a generally anti-statist perspective even if without the theoretical underpinnings of Austro-libertarianism. I was able to insert a couple additions in that direction, including a reflection by Rothbard on the medieval wars between Germany and Italy from his work Economic Thought before Adam Smith: An Austrian Perspective on the History of Economics.

Continue: From Ron Paul to Murray Rothbard: My Road to the Mises Institute – LewRockwell